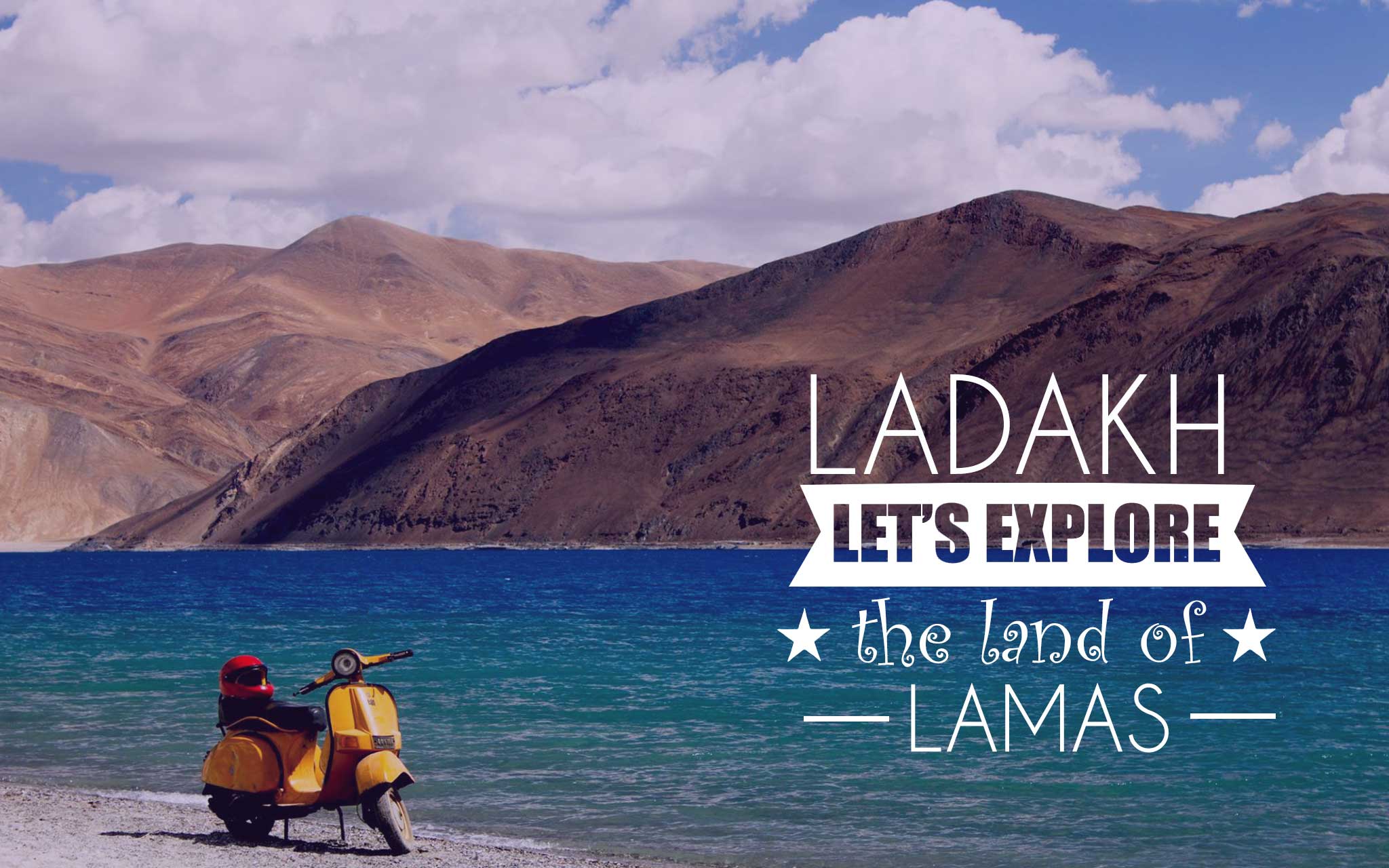 "India's Own Moonland" Leh, a high-desert city in the Himalayas, is the capital of the Leh region in northern India’s Jammu and Kashmir state. Originally a stop for trading caravans, Leh is now known for its Buddhist sites and nearby trekking areas. Massive 17th-century Leh Palace, modeled on the Dalai Lama’s former home (Tibet’s Potala Palace), overlooks the old town’s bazaar and mazelike lanes. Ladakh is a region in the Indian state of Jammu and Kashmir that currently extends from the Kunlun mountain range to the main Great Himalayas to the south, inhabited by people of Indo-Aryan and Tibetan descent.

At an altitude of 4350m and a five-hour drive away from Leh, is a lake that leaves all its visitors enchanted, fascinated and in nothing but awe at its sheer expanse, sparkling color, and backdrop.

Modeled on the basis of the Potala Palace in Lhasa, Leh Palace was built by King Sengge Namgyal in the 17th century. The palace is nine storey high, where the upper floors used to accommodate the royal family, while the lower floors held stables and storerooms. The roof provides panoramic views of Leh and the surrounding areas, as the mountain of Stok Kangri in the Zangskar mountain range is visible across the Indus valley to the south, with the Ladakh mountain range rising behind the palace is visible in the north.

Between Ladakh and Tibet, lies Moriri Lake, the largest high altitude lakes in India, at an altitude of 4,595m. This stretch of sparkling, crystal clear, alkaline water is accessible only during summer months.

Nubra valley is a dash of lush greenery in Ladakh's dessert and moon-like landscapes and slopes, being almost 3000m lower than Leh. Snuggled between the Karakoram Range and nourished by two rivers, Nubra is brimming with Sea buckthorns and Alfalfa.

With the anti-gravitational effect, this is the only magnetic hill in India. Landmarked by a yellow notice board that spells out instructions and asks you place your car on neutral gear right on the spot marked by white paint, this one will leave you in awe as your car will begin to move uphill on its own, baggage and all.

For someone who thrives on adventure and lives his life on the edge, Ladakh is their Mecca. There's nothing more satisfying than traversing such high peaks with nothing but daunting yet majestic snow-clad mountains in the backdrop. Every minute you spend here becomes a memory. From bike riders to cycling enthusiasts, this is the place to test your endurance and skill. For those who aren't afraid of the water, do not miss the river rafting in Zanskar river at the confluence of Indus and Zanskar. The price per person is around INR 1000 for the long-distance rafting. This is an absolutely unforgettable experience for people who seek thrills. The largest city in this region is Leh and although this city has many monasteries, visit nearby cities like Nubra Valley, Pulu for magnificent views of the scenic beauty. Visit one of the highest motorable roads in the world- Khardung La while on your journey to the Nubra Valley.

How to reach Leh Ladakh

The nearest airport is at Leh, which is well connected to Delhi, Jammu, Srinagar, Chandigarh, Mumbai and several other cities in India. From Leh airport, hire a cab to visit places of interest. Leh city has several accommodation options.

Road If you don't want to take flight, then you will have to reach Manali or Srinagar via trains and buses and then from Manali or Srinagar, you can catch a bus or a cab or even a shared taxi that drops you directly to Leh. The road from Manali to Leh is said to be one of the most picturesque routes in the world. A lot of people cover this route on their motorbikes, especially on Royal Enfield motorcycles as the terrain is a bit bumpy. Some cycle enthusiasts also cover this distance over their bicycles.

As mentioned, the city is at a very remote location with minimal resources available. So the region does not have a railway station. However, the nearest railway station is Jammu Tawi (700 km from Ladakh) which is well connected with Delhi, Kolkata, and Mumbai.

The Takthok monastery is the only monastery in Ladakh which belongs to Nying-ma-pa sect or Red Hat sect of Tibetan Buddhism. Known as the ‘old order’ monastery,

Situated right across Thiksey Monastery on the bank of Indus river, the 16th century Matho Monastery is about 20 km south of Leh in Ladakh region.

Situated 25 miles from Leh in Ladakh region in Jammu and Kashmir, Gurudwara Pathar Sahib stands at the place where Guru Nanak, the founder of Sikh religion

The Galdan Namchot festival in Ladakh is celebrated for commemorating the birthday and the Buddhahood of the Tibetan saint-scholar, Tsongkhapa

After the Galdan Namchot, is celebrated as the birth anniversary of Tsogkha pa, founder of Gelukpa School.

Matho Nagrang is celebrated at a Matho monastery on the 15th day of the 1st month of the Tibetan calendar.

Ladakh Tourism At A Glance

A land like no other with the superabundance of attractions to visit and phantasmagoric and fabulous landscapes, amazing people and culture, Ladakh is truly a heaven on Earth.

Bounded by two of the world's mightiest mountain ranges, the Great Himalaya and the Karakoram, it lies athwart two other, the Ladakh range and the Zanskar range. Ladakh is mystical in all the spheres it covers, from nature, geography, sceneries to the modest cultures that it fosters. Right from gompas to the sensational momos, the superabundance of attractions to visit makes this city make it heaven on earth. It is said that only in Ladakh can a man sitting in the sun with his feet in the shade suffer from sunstroke and frostbite at the same time.